Tucked in KL Chinatown (Petaling Street) area, there is a shop that offers: 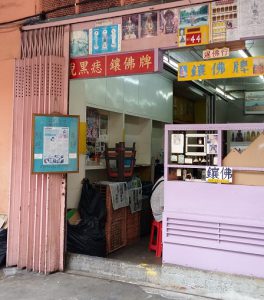 Sometimes people who got some amulets would like to put in a case or make a locket to be able to wear the amulet. As some amulets does not come in its own casing, if a person wants to make into a locket to wear, one need to sought out those who provide the service. In Wat Chetawan in Petaling Jaya,  which also contained an amulet shop also offer the service.

However if you are in KL, you can give this shop a try as the owner informed me that he has 33 years of experience in making casing for amulets.

The guy commented that there is a mole located below my eye that should be removed. Actually, I was not born with the mole… it sort of grew sometime last year on my left eye (if it is on the left side for ladies means it indicates sadness over a female person). And not long after that, my mom had became unwell.

However I am born with a number of moles behind my neck and shoulders. It is true that in my life, I often have to look out and care for people. If I hold a job, it would be one that requires me to take care of a lot of people and carry a lot of burden.

I did not have the moles removed because I sort of accepted the role and responsibilities towards others that I need to hold. In life, we are entrusted with responsibilities but would be given capabilities to deal with them. Hardship and suffering does not necessary be bad because it can toughen us up.

However, for those who are not ready and do not want to face those challenges, or now since that there is increasing threat of skin cancer which always started from a mole, you may want to have it removed. Usually you would be advised on whether a mole of certain location is auspicious or inauspicious before it is being removed.

Address of the shop:

Drowning due to water spirits/ghosts