Many Malaysian can converse in English- however, as visitors you may find it perplexing that there seems to be a number of vocabulary used that is not found in the English language.

As Malaysians, we use local jargon or slangs – which is combined from the different cultural and diversity within Malaysia. For the puzzled traveller, let me translate some phrases based on my understanding of them 🙂 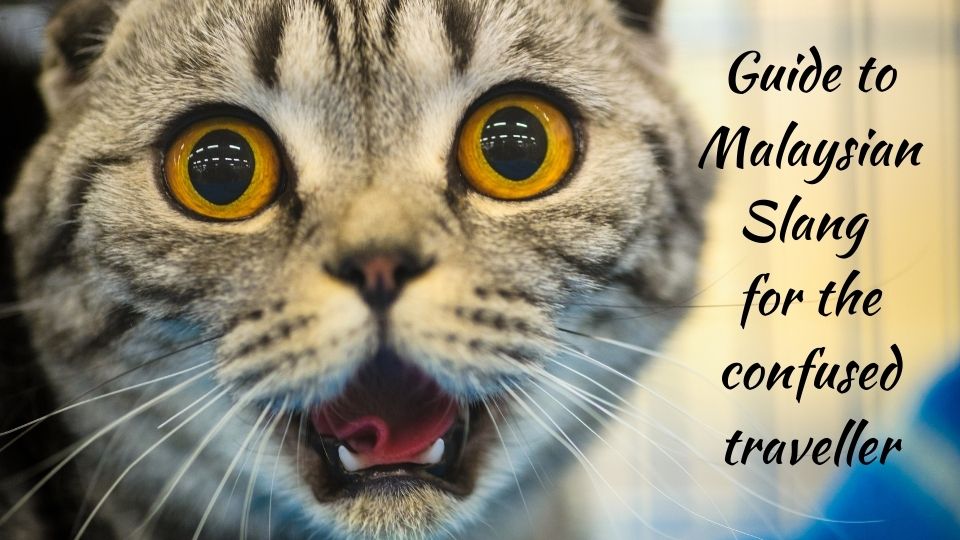 ABC
ABC is ‘air batu campur’ or ice kacang, a favourite local dessert.
Not to be confused with ABC (American Born Chinese) used in the West.

Action/ Eksyen
Means arrogant. When a person said, ‘so you action already laa’ it means that so now you are arrogant/ showing off already.

Ah Beng
A nerdy guy- usually it conjures up a picture of a guy with thick black rimmed glasses and hair combed in an old fashion manner.

Aiyoyo
A surprised expression- can be positive or negative

Annai
It is said to mean either mother, elder sister or female companion.

Bojio
Never invite. Example a person found out you have a party but never invite her, she would get upset and say ‘bojio’.

Boss
It is a valid English word. But sometimes when asking for help or favours, the phrase ‘boss’ is used to address a person as an indication of a kind of flattery. For example when a person gets stopped by a policeman for speeding, he would address the policeman as ‘Boss, aiya, I did not see the light turn red’. Or when you see people ordering food from restaurant, they would raise their hands and call the waiters as ‘boss’.

Bro/ brudder
To refer to a guy in a friendly manner, like what would do with a brother. Example if you walk into a shop and the salesman approach you, he may address you as ‘bro’ if you are guy.

Bungkus
When packing for a drink, we asked for “bungkus” means we want it packed.
We also said a business ‘bungkus’, means it had gone bankrupt, ie ‘folded’.

Chun
Refers to “pretty” or “beautiful”. Eg, “that girl is chun” means that girl is beautiful.
Some people also when you ask them to do something, they really, “chun” that means “okay” or “cool”.

Cincai
Means something done ‘sloppily’ or it can also mean ‘it is up to you’. When we said a person’s work is ‘cincai’ we meant the work is sloppy. In another setting, when someone ask us what we want, we said ‘aiya cincai- laa’ it means ‘it is up to us to decide’.

Curi ayam
Literal meaning, “stealing chicken”. It is a proverb used to refer to “being lazy”. She always “curi ayam” means she always find ways to be lazy

Goreng
Goreng is frying. In local jargon, we say ‘goreng’ means we just played guess or make up the answers or reasons. Example, ‘the previous examination was very hard. Most of the questions I could not answer, I just ‘goreng’ the answers”

Gostan
Go backwards. Usually when driving, we ‘gostan’ means move backwards. When during discussion, we gostan means ‘move back’

Fuyoh
Amazing, or impressive
Like if someone achieved something amazing, they may use ‘fuyoh’ or ‘keng’ to indicate ‘wow, this person is amazing’. A more exerrgerated thumbs up.

Kacang putih
It is actually food- usually sold in the night markets or roadside stalls. Various kinds of fried stuff or peanuts.But in the Malaysian jargon it means “easy”. Example, “this is kacang putih” means “this task is easy” or small matter, just as easy as eating the kacang putih itself.

Kamek
Squashed- like in a car or an aluminium tin being squashed.

Kan cheong
Nervous or anxious in Cantonese. “I am very kan Cheong” means “I am feeling very nervous”

Kautim/ kaodim
Meanings ‘settled’. ‘I will kau tim’ for you means ‘I will help you complete this’.

Kepala pusing
Head spinning. It may be used when the person is taken round and round or he find the task so confusing that his head literally spins or ‘kepala pusing’.

Kopi-O-Lesen
Means the licence is not gotten by virtue of actually passing the exams but due to paying bribes (it is not common but…..)

Lah, laa
A slang we like to use at the end of a sentence. I know someone from Hong Kong who is well travelled around the world. He told me that he could always tell if a someone he meets is from Malaysia or Singapore. This is because of the distinct ‘lah’ or ‘aiya’ they like to add to their sentences. He does not find this habit from Asians from other countries.

Macha
Think of Bruce Lee when getting ready to fight would sell “macha”. Not to be confused with the green macha tea. Totally unrelated.

Mamak
We usually say “mamak food” is referring to food in Indian Muslim restaurant like fried mee, rojak. When we say ‘Let’s go mamak’, means we would go there and get a meal, and in mamak stalls or shops, you can just order a cup of teh tarik and lepak (hang out) there for ages without being chased away.

Mat salleh
Referring to Caucasian. In Thailand the term ‘farang’ is used. It’s the same meaning. But someone by the name of “Mat Salleh” really existed. He was a historical figure I remember studying in history textbook.

Otak tak centre
Mind not centered or focused. Means not thinking properly or coordinated or crazy. But it is used usually as a joke.

Outstation
Means the person is in another state within Malaysia like Selangor travelling to Penang. For example when asked where a person went, he may reply ‘oh I went outstation’.

Paiseh
Means shy. When a person said ‘aiya, I am paiseh laa’, it means ‘I am very shy (to do something).

Pasar malam
Night market. We have a lot of pasar malam that opens around 5pm and close at about 9.30pm at selected places all over the country.

Pokai
The literal Cantonese term means ‘falling face flat on the ground’. Denotes going through bad luck or can also mean having no money.

Rilek
Keep calm and cool. Like they would say, “rilek, bro”…. usually use to calm an agitated person down.

Rojak
Rojak is a kind of food or fruits where you mix everything together and put a sauce on it (we have the Indian rojak or fruits rojak). In local jargon, it means it is all mixed up together (usually denotes mixed up and messy).

Sayang kitak
It is a Sarawak slang. Like if someone said “kamek sayang kitak” means “I love you”. “Kamek” means “I/me”.

Setengah masak
Half cooked or half baked. In local jargon it means something like the person is not fully trained or skilled. Example, “the college produce all the students that is ‘setengah masak’- when they come out they do not seems to understand anything”

Siow ah!
Hokkien word to say “are you crazy?”For example, when an unreasonable request is made to a person, the person looked shocked and say “siow ah!”

Tak laku
Malay phrase- means no one wants it.Example, “you punya barang tak laku” (your things does not sell/ nobody wants).

Tapau
Taken from Cantonese phrase which means ‘take away’, ie when we order food and we say, ‘tapau, please’ means we wish to order a take-away instead of dining in.

Walau/ Wahlau
It could mean “wow” or “what the??”, meaning in a positive or negative way depending on the expression and rest of the sentence.

Yum Seng
A Cantonese term which means “let’s drink together”. Similar with how “cheers” is used when drinking together.

Finally, enjoy this funny video from MGAG that tells the difference between English and Manglish:

50 Popular Food Sold in Ramadhan Bazaars
Visiting Jalan Masjid India Kuala Lumpur
The many facets of Bangunan Sultan Abdul Samad
Listen to Malaysian radio channels from the internet
If you like this post, say thanks by sharing it: