Recently, KK Supermart chains are having a donation drive for books to be donated to prisoners in Sungai Buloh. Even though the banner mentioned that it is valid from 7 Jan to 15 Feb, I only saw the banner within these few days. When I checked with the counter staff, I was told that we can still drop in books for quite some time: 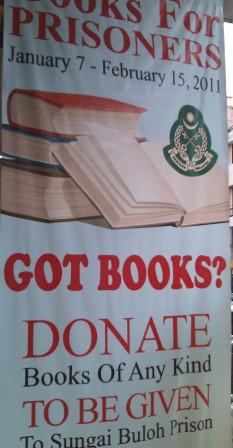 Projects such as these are very beneficial to prisoners- who are often neglected group in society.

Often, if you read about the profile of hard core prisoners- they usually have harsh family history- poverty, abuse, etc. No doubt, there are many people who come from extremely underprivileged background but could rise to be successful and contribute back to society- and often, if you interview these successful people, they would attribute their success to one or few key persons who changed their lives- mentor(s) who believed in them even when everyone else had written them off.

How many who chance upon mentors like this? Most often, being left to their own devices and with the immediate social group that they are mixing, they were brought up to believe that crime pays in order to survive.

That is why, often we cannot judge someone  just because they have done wrong. You would never know- everyday in the cell, when time passes slowly, their minds are haunted by the memories of the crime they have done. The regret and the remorse may be so great that the only way is to harden their hearts. When there is no real understanding and eventually when they are released back into society, they mix back with the same group of friends who seemed to be the only ones who could accept them. 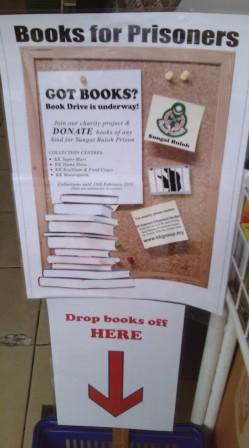 That is why, if you have books, especially motivational books that you no longer need, why not considering donating to these prisoners. KK Supermart are located almost everywhere in Klang Valley and they are opened 24 hours a day.

Once, a visiting teacher told a story about the hard core prisoners that he was counselling in Australia. He was giving motivational talks to these prisoners until he was tied up with other engagement and sent someone else in his place. Not long later, he received a call from the head warden, requesting him to go back to see these prisoners. He was told that no one had such an effect as he did on the prisoners- the prisoners who been to his classes, after they were released, they seemed to turn over a new leaf. They never came back to prison again.

This teacher was puzzled and tried to reflect on what he did that made the difference. Then he figured out- you see, the thing about this teacher is that he never judged people. When he saw a prisoner- who may have raped, killed, or commit other crimes…. he never saw them as criminals. He only saw them as a human being who yes, no doubt the person may have committed a crime, but they were in the past.

A few hard core prisioners opened up to this teacher- they told him, often in tears, that there was never a day they have not greatly regretted the crime they did. They wish they could go back in time and undo what they have done. Yet, there was nothing they could do- but to rethink and rethink about the deed that brought them in there.

Even though we may not be a life changing motivational speaker, but we can make a difference by donating books written by those who have changed and transformed others lives.

For more information about donation campaign organised by KK Group, you can contact 603-90573308 or visit their website at http://www.kkgroup.my/.

Sibu Chinese Culture Art Association offers classes
Candylicious -selling candies, chocolates |Update Closed
Where to get CNY cookies in Petaling Jaya
KFC Breakfast Review
If you like this post, say thanks by sharing it:
books, recycle